Dash, fortify
The Archer is a ranged unit unlocked by the Archery technology. Archers have both a ranged attack and the Dash skill (which allows Archers to attack after moving). Compared to Catapults, Archers are more mobile and flexible since they have the Dash skill, and Archers are less vulnerable to attacks since they have 1 defence point (compared to 0 for Catapults). But this does not mean that they are the best.

The Hoodrick tribe starts the game with an Archer. The Polaris tribe has Ice Archers in place of Archers (Ice Archers freeze the enemies that they hit).

Archers are good for: 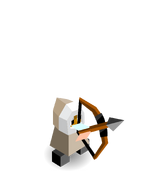 The Archer icon
Community content is available under CC-BY-SA unless otherwise noted.
Advertisement