The Catapult is a long-range unit with a powerful attack. It has the longest range of any unit and the most powerful attack of any regular unit; however, it is vulnerable to attack and cannot deal any retaliation damage. 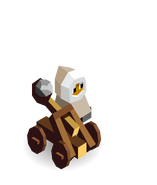 The Catapult icon
Community content is available under CC-BY-SA unless otherwise noted.
Advertisement