Dash, eat, creep
The Centipede is the super unit of the Cymanti tribe.

Independent, creep, explode
The Segment is formed when the Centipede kills an enemy unit. When a centipede has any segments, it can only move one tile at a time.

You can explode a segment to deal splash damage. If you do this, all other segments further away from the head will automatically explode too. For example, if you explode the first segment behind the head, all the segments will explode. If you explode the second segment behind the head, all the segments behind it (including the second) will explode, but not the first. Exploding segments will leave spores on land and ice tiles that don't have structures built on them yet.

Segments cannot independently take actions like breaking ice, capturing cities or recovering health. Segments do not immediately recover health by having the head choose the recover action, but will do it normally at the end of the turn.

A segment can siege a city and prevent it from producing stars, but not capture it. 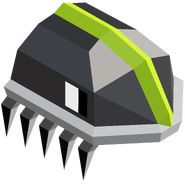 The sprite that connects Centipedes and Segments together
Community content is available under CC-BY-SA unless otherwise noted.
Advertisement