The city is the basic unit of a player's empire. Cities produce income and are worth 100 points per level, and units can be trained in cities. Each player starts with one city, their capital, and additional cities are acquired from capturing villages or enemy cities. A player is eliminated when they have lost all of their cities, or, in the Might game mode, when they have lost their capital city.

Cities produce one star per turn per level. The Workshop increases a city's income by one star per turn. Capitals may produce additional income (see below). Cities that are under siege by an enemy unit do not produce any income.

Units with the fortify unit skill receive a defence bonus in cities. Cities with a city wall provide a significantly stronger defence bonus.

Capitals can be connected to other cities, primarily through roads and/or Ports, and each city connection adds one population to both the capital and the connected city. Connected cities have a road symbol next to their name.

The cost to research technology increases with the number of cities in the player's empire. For each additional city, research costs increase by one, two, or three stars for T1, T2, and T3 technologies, respectively.

If a unit captures a city or village, then it will be supported by that new city instead of the city it originally was supported by. Units that are removed by death or the Disband ability also no longer take up any space.

Units will show which city they belong to in their information box. Some units may not belong to any city, such as those with the independent unit skill.

A player's capital is their starting city. In-game, capitals have a crown icon next to their name and have an underlined name.

The city castle is a decorative structure found in capitals. Every tribe has a unique city castle, but all are narrow square pyramids with a crown on top. If a capital is captured by another player, its city castle will remain. 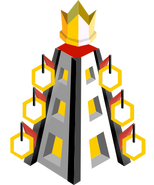 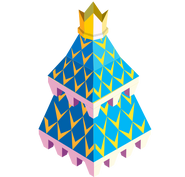 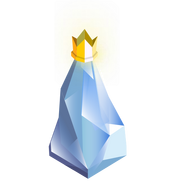 A village becomes a city when captured by a unit. Any unit can capture a village if it started the turn on the village, and capturing a village ends the unit’s turn.

The distribution of villages is randomly generated at the beginning of the game. Villages do not spawn on the edges of the map, and no more than one village will spawn in any 3x3 area.