White sandy beaches with coconut palms. Abundance of fruit and fish. Welcome to the home of the Kickoo.

The Kickoo tribe is the fifth of the 12 regular tribes in Polytopia. Kickoo starts with the Fishing technology.

Kickoo is typically considered to be one of the three strongest tribes in the game (the others being Luxidoor and Bardur) not only because Kickoo can upgrade its capital on turn 0, but also because it can build very strong Customs Houses due to the high amount of water in their territory. Also, Fishing is a strong starting technology because it allows Kickoo to rush Sailing and quickly build Ports for naval control and quickly harvest Whales. These strengths make Kickoo particularly strong in Perfection because Custom Houses are very important in Perfection, Whales are immediately visible when spawning (useful for spawn-resetting), and Kickoo has the highest chances of spawning with whales, even multiple whales, since it has the most water (whale spawn rates are consistent across tribes).

However, Kickoo is somewhat weaker early-game, particularly in more crowded games, as its fragmented landmasses can make exploration and getting villages more difficult, and it requires some time to build up its economy (centered around Ports). Nevertheless, it still remains one of the strongest tribes.

Kickoo has -mountain, +fish, and ++water. (40% of Kickoo tiles are replaced with water. This can cause discontinuities in land bridges on Lakes and water tiles in Drylands.)

Kickoo can quickly level up their cities with Fishing and Ports. The watery terrain is also helpful, as it makes it easy to establish city connections over water.

Kickoo's water-dominated terrain allows Kickoo to have very powerful Customs Houses. Given the time to research Trade and build many Ports and Customs Houses, Kickoo can establish an extremely powerful economy and produce large numbers of Battleships.

However, Kickoo can be more vulnerable early-game, especially in more crowded games where it does not have the opportunity to establish Custom Houses.

Kickoo is also very good in Perfection. It has the highest chances of spawning with whales (even multiple whales), and its whales are immediately visible when spawning. Also, Kickoo’s starting technology, Fishing, is not only useful in itself but also allows Kickoo to quickly get Sailing. This synergizes with Customs Houses, which serve as the main source of income in the late-game. 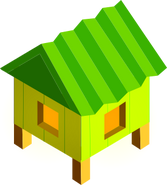 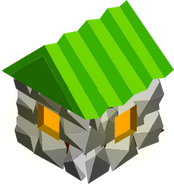 Add a photo to this gallery

Retrieved from "https://polytopia.fandom.com/wiki/Kickoo?oldid=44178"
Community content is available under CC-BY-SA unless otherwise noted.