+ 2 population to the city it's built in

Forges, which are unlocked after researching Smithery, produce +2 population for every adjacent owned Mine, as opposed to just 1 population for Windmills and Sawmills. 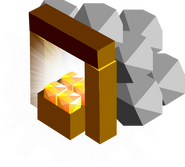 Mine
Add a photo to this gallery
Retrieved from "https://polytopia.fandom.com/wiki/Mine?oldid=35444"
Community content is available under CC-BY-SA unless otherwise noted.