The movement of a unit is determined by its movement stat, its skills, and the terrain it moves across. If not impacted by any other factors, a unit can move to tiles whose distance to the unit's starting tile is not more than its movement stat, as measured using Chebyshev distance. However, this is affected by the terrain the unit move across, the presence of roads, as well as some other factors. A unit may only move once per turn (besides the use of the dash and escape skills), and each tile can only be occupied by one unit at a time. A forced unit spawn occurs when an unit is spawned on a tile that already has an unit on it.

A unit's movement stat determines how far it can move every turn. Moving from one tile to an adjacent tile incurs a cost of 1, but moving between tiles with roads has a cost of 0.5.

Certain types of terrain impact movement. Forests without roads and mountains block movement. Units cannot move through them (they can move onto them, but no further in the same turn). Also, units cannot move into clouds (the fog of war).

Most land units moving into a port will be turned into Boats and will be unable to perform actions for the rest of that turn, even if they had excess movement points or had not attacked. However, units with the float or Fly skills are not affected.

All units exert a passive Zone of Control onto enemy units. This takes priority over movement bonuses conferred by Roads or Polarism (see #Glide). A unit that moves to a tile adjacent to an enemy unit cannot move any further, even if the unit had excess movement points.

This does not prevent units with the Dash skill from attacking after moving, and the Zone of Control goes away when the enemy unit is destroyed.

Units with higher movement stats may be able to move out and then back into Zone of Control, occasionally leading to seemingly impossible but valid movement destinations.

Movement between two tiles with Roads (or a Road and a city) requires only 0.5 moves, ignoring the movement penalty from Forests (it is impossible to place Roads on Mountains) but not Zone of Control. This only applies to Roads in friendly territory or in neutral territory, but not when moving onto Roads in enemy territory.

In order to utilize bonus movement from roads, you need to place a road where your troop is standing and then on the following tile. City tile works as a road tile. Roads can be placed on villages, but they disappear when the village is claimed.

When calculating movement cost of a tile, the game rounds up - meaning even if you have 0.5 movement points remaining, you can still move onto a tile costing 1 or more movement points. The place the unit ends up is irrelevant - you don't need a road at the final tile and movement is not blocked if final tile is an obstacle.

If Polarism has been researched, all units without the skate skill gain an extra move when moving onto ice for the first time that turn.

A forced unit spawn occurs when an unit is spawned in a tile that already has a unit on it. The unit that is already on the tile is pushed in a specific direction. Forced unit spawns can happen when a super unit spawns in a city, a Ruin spawns a unit, or ∑∫ỹriȱŋ spawns a Polytaur or Navalon. The forced spawn of super units are commonly used in besieged cities to push out the invader, and the forced spawn of Polytaurs are commonly used to "boost" the movement of friendly units.

The push order for forced unit spawns determines the direction in which the unit already on the tile where the new unit is spawned will be pushed. The push order is as follows:

This section needs to be updated.

The unit skills listed below impact movement in some way. (Units without any of these skills are called “land units”.)

Note that the Amphibian, Tridention, and Crab's movement are reduced by half on land.

Terrain and Zone of Control[] 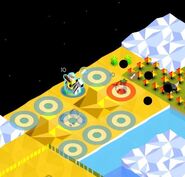 The Rider in above picture can't reach marked tiles because of an enemy archer.

Here, the rider can’t reach the marked tiles because of forests.

An enemy hidden by the fog is blocking movement. 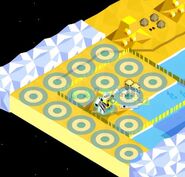 Same goes for starting point - if you're standing on Forest or Mountain tiles, you’ll still be able to move 2 tiles with your rider and 3 with a knight. However, you won’t be able to reach maximum movement of 4/6 since you don’t start on a road.

Road on Forest tiles will neutralize movement restriction. However, Roads can't be placed on mountains. 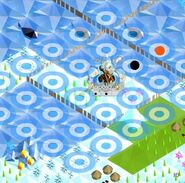 This Catapult only has 1 movement point, but due to Polarism gains an extra move when moving NE, resulting in it being able to cross 2 tiles. Alternatively if moving SW, the Road allows the catapult to move 2 tiles onto the Ice. However, since Polarism is unlocked, the Catapult then gains another movement point and is allowed to move an additional tile, resulting in a total displacement of 3 tiles - which is impossible to accomplish with any other tribe using direct movement. 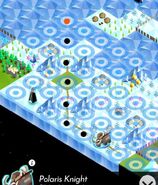 Here, the knight (3 movement) moves up to 7 tiles thanks to Polarism.