Dash, fortify
The Swordsman is a melee unit. It is an all-around upgrade from the Warrior, with more health and greater attack and defence. The unit is unlocked by the Smithery technology.

Vengir starts with a Swordsman.

Ruins may give a veteran Swordsman as a reward. 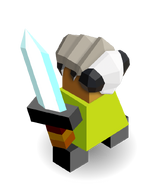 The Swordsman icon
Community content is available under CC-BY-SA unless otherwise noted.
Advertisement