Legends tell of Topan and Pol, who stepped out of the Moon and onto the Square to become the first Polytopians. As their descendants multiplied and spread across the land, they formed an empire which the tribes know now as "The Ancients." Here begins the story of the Ancient Polytopians.
-2020 Concordance Day celebration

The Ancients are the common ancestor of all Polytopian tribes. They do not appear in-game and are exclusive to the game's lore and fanbase.

The Ancients formed a great ancient empire that splintered apart in a civil war. Concordance Day commemorates the peace following the end of that war.[1] Ruins are the remains of the Ancients' settlements.[2]

The Ancients have a white turban, a orange beard, and light-blue clothing.

The first appearence of the Ancients was in a 2018 Tweet where they served as a depiction of the ancient Sumerians.[3]

2019: The first Concordance Day celebrated the end of the ancient Polytopian Civil War, fought by the original Polytopians. A simple, yet resourceful folk, the ruins of their many settlements can be found dotting the Square to this day, often harboring Giants, wisdom, and treasure! By Harry Wang.

2020: The winner of the art competition is Discord user Mantis987. Legends tell of Topan and Pol, who stepped out of the Moon and onto the Square to become the first Polytopians. By Mantis987. 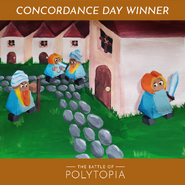 2021: Forced conformity was key in the Empire of the Ancients, with strict rules about clothes and behavior. Factions arose to combat this tyranny, demanding their own land and independence! Dissent turned to riots, and riots into hostilities, and this great empire was falling apart—the Ancient Civil War had begun. By lisavda.